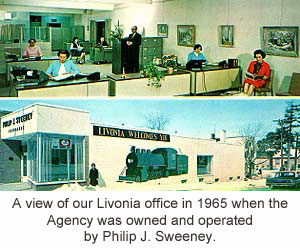 In 1859 Dr. Andrew Sill of Livonia secured an agent agreement with Hartford Fire Insurance Company. At an unknown time Dr. Sill sold his fire insurance book of business to Franklin B. Francis. Francis was a teacher by trade and like Dr. Sill sold fire insurance part-time. Francis taught mathematics and natural science at Temple Hill Academy in Geneseo for two years but stopped to settle on a farm in Lima in 1852. During his time as an educator he also dabbled in land surveying. Most notably Francis served as school commissioner of Northern Livingston County. Mr. Francis died in 1895.

The agency was transferred at some point to Will Thurston, owner operator of the Woodruff and Thurston Bank. The bank failed in the fall of 1918. Charles H. Carey who was a cashier at the bank took over the insurance business and moved it to the Boynton Grocery Block on Commercial St. (where the barber shop and law office exist today). Later Mr. Carey became Town Clerk and moved the business with him to the town office.

Sometime in the late 1920’s and early 1930’s Philip J. Sweeney began his full time insurance career. Sweeney had taught school in South Lima while selling life insurance part-time. Sweeney became an agent for Royal Globe Insurance Company and took over a book of business in Avon. About 1940 he took over the Carey business and firmly established his agency on High Street in Livonia. During his service in the Coast Guard during World War II Sweeney’s brother Maurice operated the agency for him.

Sweeney was one of the first agents in the area to secure both his Chartered Life Underwriter (1935) and Chartered Property Casualty Underwriter (1955). Commonplace for agents to secure professional designations today, during this era Sweeney gained a solid reputation with insurance carriers as a pioneer in insurance educational accomplishment.

Sweeney also operated Livingston Discount, an automobile loan and finance company for many years along with the insurance business.

In late 1963 Sweeney moved the agency from High St. to the Wingate Electric Shop on Main Street where it is today.

In 1968 John Chanler began working as a sales producer for the agency. Upon Mr. Sweeney’s retirement in 1973 John purchased the agency and continued the Sweeney name until 1980 when the name was changed to the John W. Chanler Agency, Inc.

In 1981 a new office was opened in Geneseo at 73 Main Street. This location was used until 1991 when more space was needed and the office was moved to the “old Ford garage” at 57 Main Street.

In November 2002 John’s son, Andrew Chanler bought the agency as his father was moving toward retirement. At this time the corporate name was shortened to Chanler Agency, Inc.

The last major change to the agency was moving the Geneseo office to a newly acquired building at 128 Main Street in Geneseo in January 2005.

The original contract with Hartford Fire Insurance Company established by Dr. Sill in 1859 is still in force today. We hope to continue the element of small business in the community for decades to come.

Disclaimer: The Chanler Agency, Inc. is using this website, www.chanleragency.com, for the purpose of soliciting insurance in the state of New York.